Lama Zopa Rinpoche teaching at Light of the Path Retreat, North Carolina, US. 2016

As the blog’s core is composed of material drawn and woven from Lama Zopa Rinpoche’s extensive edited talks, some explanation of how oral discourse in Tibetan Buddhist culture is situated in both experiential (meditational) and scholastic (dialectical) traditions is valuable. This is especially the case as the Buddhist setting differs significantly from a “Western” tendency to view oral tradition as folkloric and popularist and thus somehow fundamentally opposed to the hierarchically-conceived “academic” disciplines.

Speaking of the distinct dialogue between oral and textual genres in the Tibetan spiritual tradition, Anne Carolyn Klein observes,

Oral textual commentary is typically just as rigorous syntactically and conceptually as the text on which it is based. In giving it, the teacher draws on material from other texts which supplement, or are supplemented by, his own analyses developed over a lifetime. What chiefly distinguishes it from the explanations contained in texts are its responsiveness to questions asked, its reflection on a wider range of topics than any one text is likely to include, and the insertion of unique examples, often from the lives of teacher or student, to illustrate the teacher’s points. In addition the Lama adds to the reading an aura of kindliness, humor, excitement, or severity, depending on his demeanor.[1] 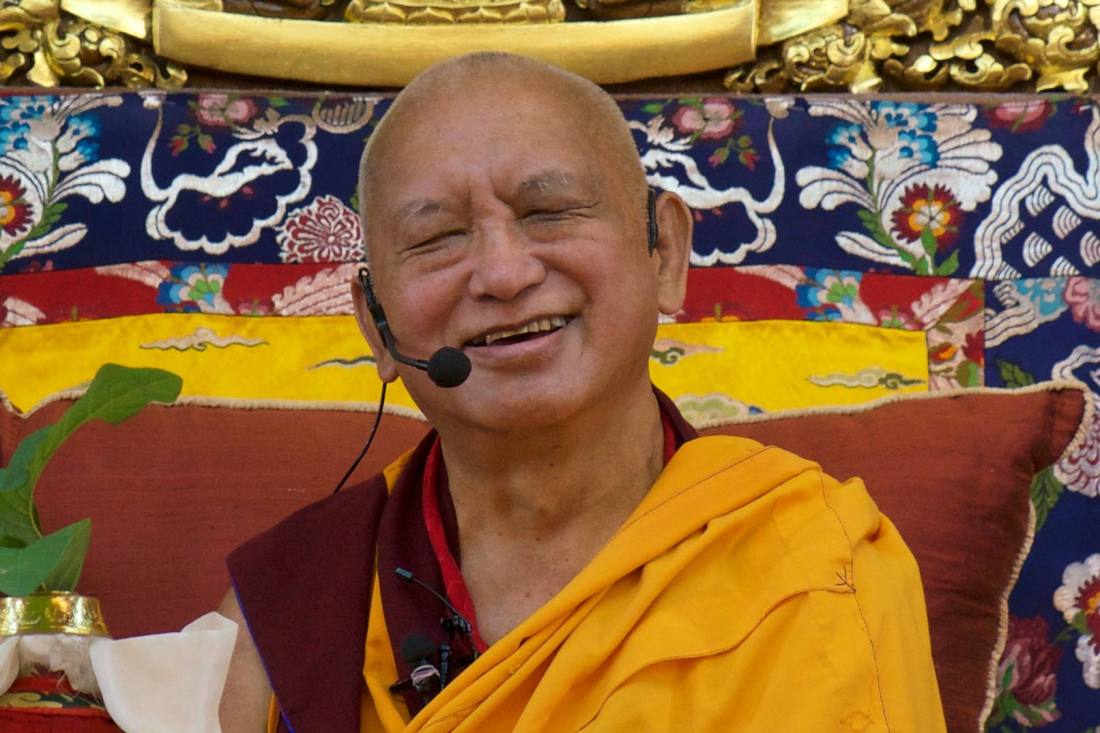 While all this certainly describes the discourse material to be found in Reflections on Emptiness: Moon in Rippling Water, it is Klein’s next point regarding the qualities of the qualified teacher within the Tibetan Buddhist tradition that best captures the dignity of spoken sacred discourse:

However, in Tibet, texts such as Tsong-kha-pa’s are rarely left to speak for themselves as texts so often are in modern secular contexts. Moreover, the “distance” between texts and persons is formulated differently than in the West. The traditional Lama “represents” the text in several senses: as often as not he has memorized it and may spontaneously recite portions of it or related texts in the course of oral commentary. In addition, as a representative of the Buddha, his teaching, and his community of followers, the Lama embodies the text in concrete ways. He can in a very real sense be considered a “living text,” and he teaches the texts he lives in order to produce more living approximations of the traditional values and forms of knowledge they elaborate.[2]

Though constrained by absolute modesty, Lama Zopa Rinpoche’s forceful and often highly inventive forms of rhetorical appeal (never divorced from compelling logic and just as compelling common sense) speak always to his rare stance as a yogin-scholar: someone who unravels and imparts various essential Dharmic instructions on the basis of personal realization. This also extends to his explications of the root texts and classical commentaries.

The implication: the impetus of his advice is as something not to be just heard, but to be reflected and meditated upon, until it becomes integrated at every level of our body, speech, and mind. In so doing we forge a living bridge between the spiritual teacher, who exemplifies the Buddha as authentic founder/primogeniture of the teachings, and ourselves, revealed (within the immense good fortune of being able to listen and comprehend) as vessels of latent but similar capacities for spiritual accomplishment. The role of the spoken word (as discursive imperative) and deed (as its more than didactic accomplishment) are therefore found conceptually united and devotionally fused. Not to mentioned inspirationally charged.

Light of the Path retreat, 2016 North Carolina, US

This is why Lama Zopa Rinpoche will zealously downplay his capacity (as does His Holiness the Dalai Lama) to guide the student toward the meanings “whose profundity he may claim only partially to comprehend, much less embody.”[4]

At key moments he will even stop proceedings to poke ludicrous fun at himself as the “Mickey Mouse Lama,” then just as swiftly, just as adroitly, turn to quote from memory a verse from Śāntideva or Tsongkhapa, and proceed to deliver a seemingly impromptu commentary, employing classic debating skills and logic on the basis of prodigious memory and personal experience before, sometimes just as abruptly, returning to finish or embellish subject-matter only left apparently suspended, even some considerable rhetorical-time ago.

From this perspective we might suggest that the extensive passages drawn from Lama Zopa Rinpoche’s discourses and posted as blog content become what Klein evocatively, delightedly calls “emanation” of advisory speech, its primary purpose being to tend to both our temporal and ultimate needs in ways delicately inflected to meet our individual dispositions, in order that we become qualified to best tend to the temporal and ultimate needs of all kind mother sentient beings.

As Klein proposes, “direct speech, like advisory speech, often involves something which is usually held secret—something, in short, that is usually not spoken.”[5] What she means is that tangibly before you is something finally mysterious—what the Tibetan tradition calls, with utmost reverence, “ear-whispered advice.”[6] This refers to personal (and thus often secret) advice given to us directly by our teachers in a manner that accords precisely with to our individual karmic capacity as well as cultural aptitudes. Such is the unique kindness of the guru.

[1] Anne Carolyn Klein, Path to the Middle (Albany: State University of New York Press, 1994), 5. See also Georges B. J. Dreyfus, The Sound of Two Hands Clapping (Berkeley and Los Angeles: University of California Press, 2003), 149–64, for an account of the role of orality in the Tibetan monastic tradition, one differing in several regards from Klein’s own.

[6] Regarding ear-whispered lineages (snyan bygyud) Roger Jackson glosses: “A confidential transmission in which special instructions have been handed down orally from guru to disciple. Ear-whispered lineages often preserve tantric traditions that have been transmitted outside of major institutional structures.” See Thuken Losang Chökyi Nyima, The Crystal Mirror of Philosophical Systems (Boston: Wisdom, 2009), 501. Considered in this more precise way, ear-whispered advice involves a secret transmission of an intact and carefully preserved unwritten lineage only conferred when conditions between lama and student  (as suitable vessel) are deemed by the lama as exactly suitable. Thus it may be distinguished from simply private or personalised advice. In practice, the two (ear whispered and private advice) may be exquisitely mixed, especially as ear- whispered advice is not to be simply heard or received, but actually implemented/practised. It therefore constitutes a special bond and ongoing relationship, or entrustment,  between lama and student, while also safeguarding the lineage from erosion due to careless or improper dissemination, or perhaps, just as erosively,  misinterpretation due to being considered as nothing that is rare or special.