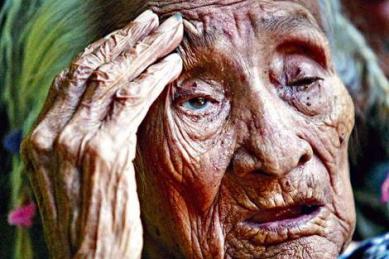 You need a correct intellectual understanding of the ultimate nature of reality. If not this, then you must achieve at least some understanding of what emptiness means. This is because if you have gained even some Dharma wisdom you have already eliminated that much darkness of ignorance. Before doing so you had no idea from where all your problems came—no understanding of how all the sufferings such as rebirth, old age, sickness, death and so forth arose from the root of saṃsāra: ignorance;[1] no idea why these things happen, how they come about or what created them. But with even a little understanding of emptiness you get an idea.

It is not just a matter of generating some blind faith in emptiness. Practicing Buddhadharma on the basis of blind faith means doing things without understanding their meaning. By comprehending this profound topic you know that there is something, in terms of experience, to be realized. As I always mention, you are responsible. When you realize the emptiness of the I, you understand how the I is empty of existing from its own side. At that time you acquire full confidence that liberation is achievable. It is possible. Not only this, but it is possible for you to achieve it. You can prove this to your own mind because you have discovered that the ignorance apprehending the I and other phenomena as truly existent is a wrong concept.[2] Objects don’t exist in the way this ignorance apprehends them to exist. The truly existent I and other phenomena are the objects of a wrong concept. This means when ignorance is overcome, holding and believing in the truly existent appearance as true is also overcome.[3] Now you see how it becomes possible for the root ignorance to be completely removed from your mental continuum. You generate full confidence that development and realization of this wisdom will eliminate this ignorance together with its seeds.

[1] As Gen Lamrimpa explains, “Ignorance is not merely not realizing emptiness; rather, ignorance is so called because it stands in direct opposition to such knowing. As an analogy, a lie is not merely an untrue statement, rather it stands in direct opposition to such knowing.” Realizing Emptiness (Ithaca: Snow Lion, 1999), 50. Hopkins also qualifies, “An ignorant consciousness is not just a consciousness which does not know suchness but a concealer of suchness through actively assenting to the false appearance of objective existence. Even in direct sense perception, forms, sounds, odors, tastes, and tangible objects appear to exist inherently, as if they existed in their own right. All phenomena except emptinesses appear to the cognizers that certify them as existing as if they exist inherently. Since the ignorance that assents to this appearance is the root of cyclic existence, its role in everyday perception is emphasized through naming all phenomena except emptinesses ‘truths-for-a-concealer,’ truths for ignorance.” Meditation, 417. See also the Dalai Lama, End of Suffering, 209.

[2] Truly existent (bden pa yod pa, satyasat). Rinpoche’s frequent use of “wrong concept” (log rtog pa, vipratipatti) requires comment if we are to determine how it does not simply refer to mistaken conceptual thought (or mistaken thought). To this end, Geshe Jampa Tegchok details how we must distinguish “wrong” (log pa/phyin ci log pa, vipraryaya) from mistaken (’khul ba/ brdzun pa, bhrānta) because their meanings differ. He illustrates, “Minds are deemed mistaken in relation to their appearing object—that is, whether true existence appears to it. Minds that are erroneous are distinguished in relation to their apprehended objects. A visual consciousness is erroneous if it perceives white snow as blue or the landscape moving when we’re in a train. A mental consciousness is erroneous when it grasps true existence or when it thinks incorrectly.” Insight into Emptiness (Boston: Wisdom, 2012), 207–8. He further details, “In fact, every conventional valid mind of sentient beings is mistaken in terms of how things appear to it because its object always appears to it as if it were existing from its own side. However…the valid I-apprehending mind is not mistaken in the way it apprehends the I because it does not grasp the I as existing inherently as it appears. Thus it is a valid mind. The I-grasping, on the other hand, not only has the appearance of an inherently existent I, but it also grasps that appearance as true; it thinks the I exists inherently as it appears. While this mind is mistaken with respect to its appearing object, it is also erroneous because it grasps the conventional I to exist inherently” (ibid.). See also ibid., 86–87.

The example of grasping at an inherently existent I can be substituted by any other phenomenon. It is clear, therefore, that when Rinpoche talks of “wrong concept” he is referring specifically to this erroneous (rather than just mistaken) conceptual mind—erroneous (and thus always invalid) because it “incorrectly grasps the I [and other phenomena, such as the aggregates] as inherently existent” and, as Tegchok adds, this “keeps us bound in cyclic existence and is therefore extremely harmful” (ibid., 86).